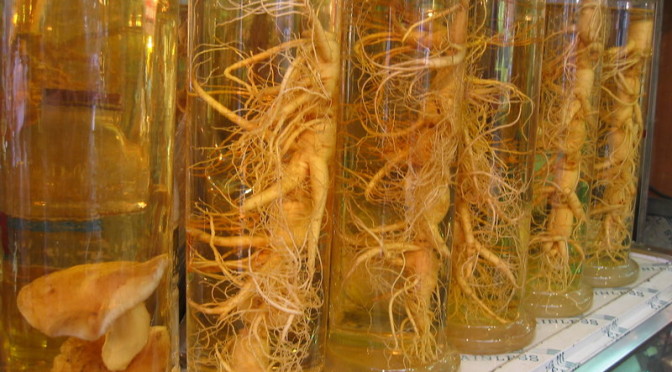 This is a syndicated post by Daniel Trambaiolo that first appeared at http://recipes.hypotheses.org/5410

Ginseng, one of the best known drugs of the East Asian herbal tradition, can be purchased today almost anywhere in the world, but in the early modern period its availability was much more limited. The roots of Panax ginseng could be harvested only from its natural ecological range, in a region stretching across Manchuria, Siberia, and the Korean peninsula. In countries like Japan, where doctors relied on Chinese styles of herbal therapy but did not have direct access to herbal drugs that grew only on the continent, the roots had to be imported at high cost.

The cost of Korean ginseng became a source of concern in Japan during the final years of the seventeenth century, as the need to pay for the drug contributed to a steady outflow of Japanese silver that was used to pay for foreign products. During the early eighteenth century, the Japanese shogunal government encouraged doctors and herbalists to develop a domestic substitute, either by finding a native plant with similar medicinal properties or by discovering a way to cultivate Korean ginseng plants on Japanese soil.

Panax ginseng did not grow natively in Japan, but the related species Panax japonicus appeared similar and promised to have similar medicinal properties. However, the roots of the native Japanese species had a distinctive segmented appearance that led to Japanese doctors calling it “bamboo-segment ginseng”; their flavour was also more bitter and less sweet than the imported Korean product–a concern for many doctors, who believed that flavor was closely related to therapeutic efficacy. Some drug sellers claimed to possess secret methods that could transform the native herb into an equivalent of the imported drug, but how could these claims be evaluated?

Korean doctors were one obvious source of authoritative information on ginseng, but it was difficult to discuss the matter with them because the shogunal government had enacted strict policies limiting the movement of foreigners into Japan. Among the rare exceptions were the Koreans who travelled to Japan on diplomatic missions. Starting in 1682, these missions included a “medical expert” (K. yangǔi, J. ryōi 良醫) whose functions were to provide medical care for the members of the embassy and to allow Japanese doctors the benefit of Korean medical knowledge.

Neither the Japanese nor the Koreans could speak each others’ languages, so they communicated by writing down questions and answers in classical Chinese, a form of conversation known as “brush talks” (K. p’ildam, J. hitsudan 筆談). The records of these conversations were often preserved in manuscripts or books printed for wider dissemination, and they can offer us insights into the styles of cross-cultural communication that these embassies facilitated–as well as into the ways Korean and Japanese doctors tried to derive benefits from each other without giving away too much in return.

The following exchange on ginseng took place between the Japanese doctor Kawamura Harutsune and the Korean doctor Cho Hwalam during the Korean embassy of 1748. (The translation is based on the published version of their conversations, which was distributed by the prominent Edo bookseller Suwaraya Mohei.)

Kawamura: In our country there is a type of ginseng whose stem, leaves, flowers and berries are just as described in the Materia Medica; its roots are similar in shape to what Zhang [Zhicong] calls “bamboo-segment ginseng.” It is very bitter in flavor and unsuitable for use, so people customarily boil it with licorice root or process it with honey water. But although the bitter flavor departs and a sweet flavor emerges, it is not the original flavor.

However, my father found a processing method that is quite acceptable; it does not rely on the flavors of other drugs, but the bitter flavor departs and a sweet flavor emerges. When my father consumed [imported] ginseng, he would always see blood in his phlegm. When he consumed the ginseng that he had processed himself, he would also see blood in his phlegm. Looking at it this way, is its efficacy similar to the ginseng from your country?

Cho: While I was in Osaka, I already heard people talk about your country’s ginseng. Although when you see the stem and leaves it looks similar, after tasting its flavor and inspecting its form it is clearly not genuine. You can perform all sorts of marvelous transformations to alter its bitter flavor, but how could you use it? There is no method for processing ginseng: you should use it just as it is naturally. Don’t be confused about this!

Kawamura: Your explanation is sufficient to dispel doubts. However, among several pounds of ginseng from your country, some roots have a burnt yellow color and seem to have undergone processing. Moreover, during [the embassy of] 1711 the Korean doctor Ki Tumun transmitted a processing method to a disciple of my grandfather. However, the paper has been eaten by insects and is now difficult to read. I will briefly write it down here, but I beg you to enlighten me further.

[Thereupon, he told me the method for processing ginseng. It is marvelous, and I have submitted it to the authorities. I do not record it here, but I have recorded it elsewhere and keep it in my home.]

Unfortunately, there are no surviving records of what Cho transmitted to Kawamura, so it is impossible to know whether it was a genuine recipe used by Koreans for processing ginseng or merely one he invented on the spot to deflect Kawamura’s questioning. Kawamura may have decided to omit the recipe from the published version of the brush talks in order to profit by selling ginseng processed according to a “secret Korean recipe.” However, his opportunities for doing so would probably have been quite limited. A few years before the meeting between Cho and Kawamura took place, a different group of Japanese herbalists succeeded in cultivating Korean ginseng from seedlings smuggled into Japan from Korea. As this new source of cultivated ginseng became commercially viable, the demand for “processed” ginseng dwindled rapidly and the recipes for such processing were gradually forgotten.