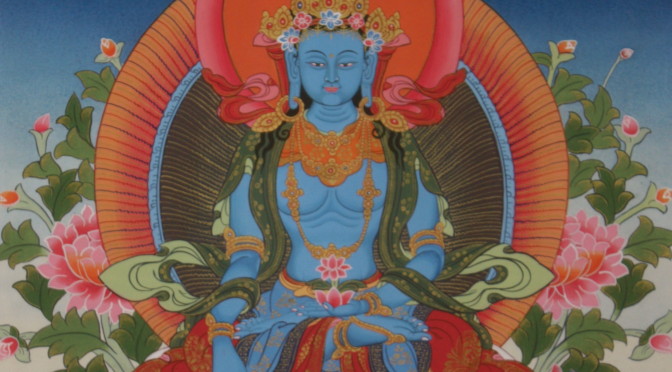 In contemporary American culture, we have enhanced awareness of Buddhism by bringing it into dialogue with science.  Jon Kabat- Zinn, who is almost single-handedly responsible for this development, has brought about a cultural renaissance with regard to the inclusion of mindfulness in the healing arts. However, there are other healing aspects of the path, the deep rituals of traditional Buddhist healing practices that may also serve to revitalize our Western healing monoculture. Tibetan Medicine, particularly, has evolved into its own art & science, woven together with Mahayana Buddhist practice.  It works with herbs, with needles, pulse diagnosis and many other techniques. And, it works with the sacred.

We are hungry for a direct experience of the sacred in this culture.  We are continuously making contact with spirituality through our ways of making meaning.  This is the source of our resiliency. Narratives mediate between the inner world and the outer world, giving shape to our experience.  However, healing (even in psychology) is not only about talk.  It is embodied.  For this reason, the wider field of Buddhist healing practices, particularly Mahayana ritual, merits more thorough study.  Ritual is performed narrative, embodied narrative. The rituals of traditional Buddhist medicine are powerful vehicles for spiritual transformation that reconnect clients with an embodied wholeness.

Chod, Medicine Buddha practices, and other traditional Tibetan rituals are currently used by healers to evoke sacred energies. These rituals create the ground for experiences of radical empathy between client and healer, support psycho-spiritual integration of the healing crisis and also contact deep archetypal realms of the psyche. In reclaiming the power of ritual within healing, we have access to a deeper well than object-materialism provides.  Through this exploration of ritual we will rediscover healing as catalyst for spiritual transformation.

Ten Buddhist healers shared their stories. Of these, most were Tibetan Buddhist practitioners, due to various social and cultural factors precipitated by the geopolitical struggles of the 20th century. Western acculturation has reshaped the societies of Thailand, Korea, Japan and other traditionally Buddhist countries during the past hundred years. Many of the lineages of traditional medicine have been the casualties of American missionaries’ proselytizing influence. Within China, Cambodia, and Vietnam, Buddhist societies were reshaped to fit the needs of an atheist state: Buddhist practices were considered bourgeois and a potential threat to the autonomy of the state. Acupuncture and other traditional healing practices were “reformed” by the Chinese government to retain mechanistic functionality; spiritual components of traditional healing were removed from the traditional medicine canon. While there are certainly reservoirs of traditional healing cultures within these countries, and to some extent, within their émigré communities, traditional healing resources are more easily accessed within Tibetan communities.

The healers represented a broad spectrum of healing praxis. Several healers worked within more than one healing modality. Two were doctors of Tibetan medicine; two were acupuncturists; five worked with subtle energy; three worked both through ritual and ceremony, and through counseling. These five classifications (doctors of Tibetan medicine, acupuncturists, energetic healers, performers of ritual, and counselors) describe the full range of traditional Buddhist healing practice. Coresearchers’ healing modalities reflected the syncretic nature of Tibetan Buddhist medicine, as it is influenced by other cultures and healing pathways. The acupuncturists had trained in both Tibetan Buddhist and classical Chinese medicine. One of the Tibetans integrated Reiki into his Medicine Buddha practice. A Chodpa (Chod practitioner) kept up a thriving homeopathy practice. This accurately reflects the cultural crossroads at which Buddhist traditional healing is situated in the 21st century. All were recognized by their communities as healers—sought out for pujas, traditional medicine and energy work and counseling, and given various degrees and recognitions according to their lineage.The Cultural Narrative of Ritual

Within the healers’ Buddhist cultures, rituals serve as the embodied narratives of healing practice. Let’s explore a few Buddhist definitions of ritual as a prelude to the discussion of the specific rituals that healers used in the context of their work.

There are several Tibetan words that convey the meaning of “ritual.” Choga is the Tibetan translation of the Sanskrit vidhi, “manner or way of acting” or “rule”: This term may refer to the guidelines for a ritual, or the ritual itself. However, Choga would not include the recitation of mantras or performance of mudras, although these are among the rituals described by these traditional healers, and these practices are part of many Choga (Cabazon, 2009). The Tibetan definition of Choga is “a method for accomplishing a goal” (Cabezon, 2009, p. 14). Within this broad understanding, we can consider all the healing practices described by these traditional healers as ritual. As Buddhist teacher Tenzin Wangyal Rinpoche has put it, “Ritual is like a form of language that has a power to catch issues when they are on the surface.[1]” Buddhist scholar Arai (2013) described the power of this embodied language to convey an experience of interrelatedness that surpasses cognitive processes:

In a worldview where the interrelatedness of all things is the primary point of reference, healing means to be in harmony with this impermanent web of relationships that constitutes the dynamic universe. It is difficult, however, to comprehend—much less experience—something so expansive. Interrelatedness cannot be experienced deliberately. Rituals, however, can be a conduit to an intuitive experience of interrelatedness, based on the body, precisely because rituals can induce modes of being that transcend linear and rational logic and facilitate contact with the ineffable. Rituals can affect a person holistically by entering below the radar of cerebral cognition and bypassing dualistic perception. They permeate the body-mind. . . . Therefore rituals that do not explicitly purport to be healing rituals can indirectly facilitate a key dimension of a Buddhist healing activity—a nondualistic experience of reality.[2] (p. 3)

These Buddhist understandings of ritual can provide a gateway into our discussion of ritual, which can additionally be informed by contemporary Western approaches to healing ritual—and ultimately, the healers’ stories and understandings of their work.

Given that an exploration of healers’ stories is a doorway into a different cultural world, a world of contemplative and indigenous practices, it is essential to prepare ourselves for the art and science of translation. While all interviews were conducted in English, these narratives, in their telling, also included body language, pauses between words, and other contextual cues that cannot be replicated on the printed page. As one healer counselled, it is necessary to listen for the spaces between the words.

Choga, ritual, is a path of accomplishing a goal; accordingly, in structuring  this discussion of healing rituals, I have differentiated between these rituals according to their goal.  A full description of these rituals can be found here.

The eclectic cultural praxis of the healers brought the researcher to actively question whether there are core ritual components of the healing process that can be identified across traditional cultures. Within this study, I sought to engage indigenous and transcultural scholarship that may illuminate the core elements of healing ritual. Koss-Chioino (2006a, 2006b) conducted field research in Puerto Rico and Latin American countries on Indigenous spirituality and healing. She then collaborated in the interdisciplinary STRP (Spiritual Transformation Scientific Research Program), which sought to identify universal factors that influence the process of spiritual transformation.  Based on this research, Koss-Chioino (2006a) hypothesized a global model of healing ritual.

My exploration . . . is based on an assumption that cultural elaborations—such as very different mythic worlds, diverse symbol systems, different schemas to identify illness and disorder, various types of ritual paraphernalia and so on—are elaborations of content rather than process. . . . What I suggest here as foundational aspects of the healing process can also be identified in some psychotherapeutic modalities, although they appear of lesser importance in the healing process in these psychotherapeutic modalities. (p. 46)

This model centered upon three components: transformation, relation, and radical empathy, a state in which the healer and client’s experiences are felt by the healer as a single relational field (Koss-Chioino, 2006b). This concept of radical empathy is analogous to Siegel’s concept of integrative joining: through tracking, the therapist’s whole-body listening and attunement to the client, accompanied by unconditional acceptance and kindness, a level of resonance is achieved that catalyzes the therapist’s interoceptive awareness of a connection “before and beyond words” (Siegel, 2010b, p. 142). Koss-Chioino’s finding of the centrality of radical empathy to the healing process is congruent with the narratives of traditional Buddhist healers: To cite coresearcher Dr. Wangmo, “the seed of the doctor is compassion.” Within this study, the centrality of radical empathy was expressed through the themes of reflecting wholeness and relationships. The active practice of radical empathy within ritual healing process is discussed in this study’s delineation of healing ritual through the use of the term therapeutic attunement.

Koss-Chioino (2006b) concurred with Katz’s definition of spiritual transformation as “dramatic changes in world and self views, purposes, religious beliefs, attitudes or behaviors (Katz, 2004, p. 15). She described the spiritual transformation of the healer as a somato-emotional and spiritual learning that supported new capacities for working with sacred energies and the development of empathy, often through the archetype of the “wounded healer” (Koss-Chioino, 2006b, p. 656). This is consistent with healers’ narratives, and particularly resonant with narratives that describe the healer’s successful resolution of healing crises discussed earlier in this chapter. Within this study, the centrality of spiritual transformation to the healing process is described through the theme of change of consciousness. In this study’s discussion of healing ritual, spiritual transformation is identified with the rituals of evoking sacred power and changing awareness.

Koss-Chioino identified relation as the third core element: healers expressed and acted on a belief “that a person is continually affected by what other persons are feeling, particularly within families” (Koss-Chioino, 1990, p. 55). In one setting, ritual communications reinforced the client’s awareness of this interconnection through reference to individuals as “grains of sand” within the wider universe. Within this study, the centrality of relation is described through the themes of relationships and tendrel. The active function of relation as an element of ritual is described as the ritual of reconnection with the natural world and community.

There is some distinction between these studies, with regard to the treatment of the spiritual transformation, relation, and radical empathy of the client: Koss-Chioino’s (2006a, 2006b) study described the centrality of these ritual elements with reference to the healers’ experiences. However, her model suggests that the experiences of spiritual transformation, relation, and empathy are also central to the client’s experience, both in traditional healing and within the psychotherapeutic process. Within this study, the connection between Buddhist healer’s ontology and praxis was additionally mediated through the core rituals of setting intention, mindfulness, and creating sacred space. These rituals prepared the ground for the efficacy of ritual elements identified with spiritual transformation, relation, and radical empathy.

It is the researcher’s opinion that this study should be weighed in context with Koss-Chioino’s fieldwork and related research on the core components of healing ritual, to advance the research of the STRP (Spiritual Transformation Research Project). More research is necessary to discern whether the core ritual components of healing across cultures can be summarized through an integration of Koss-Chioino’s three ritual elements with the ritual elements of setting intention, mindfulness, and creating sacred space, or whether there are functional differences across cultures with regard to their healing paradigms.