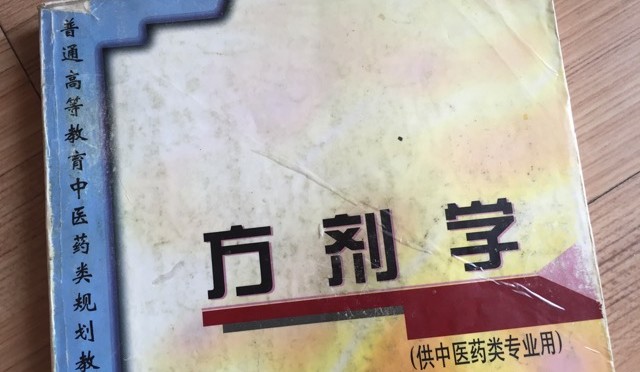 Memorizing formulae is something no herbalist can avoid. One sometimes hears people say that memorization is unnecessary, you can just look up a formula in a book when you need it. This is somewhat like saying that memorizing vocabulary isn’t necessary when learning a foreign language, you can just look it up in a dictionary when you need it. An effective herbalist must speak the language of herbs fluently and be able to construct new sentences (formulae) on the fly to adapt to changing circumstances.

In my own studies recently I’ve been reviewing formulae that I use so infrequently it’s hard to remember their ingredients. I thought it might be interesting to share some of the methods I’ve used to memorize formulas. None of these are new by any means, but I’ve found them very helpful over the years. 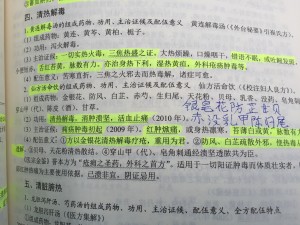 This one, Xianfang huoming yin (仙方活命飲, Immortal-Formula Life-Saving Beverage), is the representative formula for the dispersing method (xiaofa 消法) used in treating the early stages of welling abscesses (yong 癰). Historically it’s been highly respected, but I haven’t had call to use it myself (though I do get to use Wuwei xiaodu yin 五味消毒飲, Five Flavor Toxin-Dispersing Beverage, on occasion).

The notes hand-written in the text is my mnemonic. This is one of my favorite ways to remember longer formulas that don’t break down into neatly analyzable divisions. I make a rhymed verse from the names of the herbs. I thought I’d share this one for fun.

In pinyin it goes (I’ve made one change since this photo was taken):

Part of how I make this work for me is by grouping the herbs roughly by function (when the rhyme allows it). So the first three (jinyinhua, zaojiaoci, tianhuafen) are all herbs that address the toxic swelling rather directly (I could have put chuanshanjia in this group too, but it didn’t fit). The second four (fangfeng, baizhi, gancao, beimu) are a more loose group that assists with that function. The second line is all movers, starting with one qi mover (chenpi) and finishing with a whole mess of blood movers (moxiang, ruxiang, chuanshanjia, chishao, dangguiwei).

I’m very oral-aural–and I’ve always loved poetry–so that’s probably partially why this works well for me. But I’ve been shocked at how well it works. I’ve remembered some of these rhymes for years without using the formula or reviewing the rhyme. 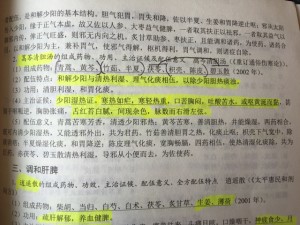 I find that some formulae, however, can be easily divided into parts based on the function of the herbs. So in the example above I’ve broken down Hao-qin qingdan tang (蒿芩清膽湯, Sweet Wormwood and Scutellaria Gallbladder-Clearing Decoction) into four pairs of herbs:

Qinghao and huangqin: The  lords of the formula that clear gallbladder damp-heat. Qinghao is the source for the artemisinin malaria medicines that earned Tu Youyou the nobel prize recently. From a Chinese medicine point of view it has the useful ability to clear heat that is hidden inside dampness in the same way the ashes of a fire can look cold but still hide glowing-hot embers.

Chenpi and zhike: This pair move the qi, which is often obstructed by dampness leading to problems like glomus in the epigastrium.

Fuling and Biyu san: This pair is a bit of a cheat since the second member is actually a small formula containing huashi, sheng gancao, and qingdai. Nevertheless, that’s how the formula is usually written. Both these ingredients disinhibit the urine, draining dampness downward and out of the body.

The Guizhi tang 桂枝湯 family provides good examples of all three of these methods. The basic structure of the this family is the formula Guizhi tang itself (guizhi, shaoyao, zhi gancao, shengjiang, dazao), which is built from three formula elements (small formulae of one to four ingredients that act as the building blocs of larger formulae):

guizhi + zhi gan cao: This combo supplements the yang–particularly of the heart and spleen–and the defense (wei 衛). On its own, it is a formula called Guizhi gancao tang 桂枝甘草汤 used to warm and supplement the heart yang. It embodies the principle “acrid and sweet produce yang (xin-gan hua yang 辛甘化陽).”

zhi gancao + shengjiang + dazao: This combination is frequently used by Zhang Zhongjing 張仲景 and serves to protect and nourish the stomach. It is particularly important in Guizhi tang because this formula acts primarily through the spleen and stomach–hence the saying that it “releases the flesh (jieji 解肌).”

The first Guizhi tang modification seen in the Shanghan lun (傷寒論, Treatise on Cold Damage) is an example of adding ingredients: Guizhi jia fuzi tang (桂枝加附子湯, Cinnamon Twig Decoction with Aconite Accessory Root Added). In this formula, fuzi is added to more strongly supplement the defense yang. It is used when a patient’s defense yang is weak or damaged by improper promotion of sweating.

The second modification of Guizhi tang in the Shanghan lun is a classic example of removing an ingredient: Guizhi qu shaoyao tang (桂枝去芍藥湯, Cinnamon Twig Decoction with Peony Root Removed). In this formula, the removal of shaoyao removes the second, yin-nourishing, formula element. This results in a formula that more strongly emphasizes warming and supplementing the heart yang. In the Shanghan lun it is used when incorrect purging damages the heart yang, allowing a cold evil to fall into the heart, but the Guizhi tang pattern persists.

The third modification of Guizhi tang is an example of replacement (or removal and addition, same difference in this case): Guizhi qu shaoyao jia fuzi tang (桂枝去芍藥加附子湯, Cinnamon Twig Decoction with Peony Root Removed and Aconite Accessory Root Added). Here fuzi is added to the previous formula, increasing yet further its ability to warm and supplement the heart yang. It is used in the same patterns as the previous formula, but when stronger cold is present.

Not all examples of replacement can also be described as removal and addition. The Ma-Xing family is an excellent example. This family has three representatives in the works of Zhang Zhongjing: Mahuang tang (麻黄汤, Ephedra Decoction), Mahuang xingren gancao shigao tang (麻黄杏仁甘草石膏汤, Ephedra, Apricot Kernel, Licorice, and Gypsum Decoction), and Mahuang xingren yiyiren gancao tang (麻黄杏仁薏苡甘草汤, Ephedra, Apricot Kernel, Job’s Tears, and Licorice Decoction). All three formulas contain the core two ingredients of the family–mahuang and xingren–as well as gancao, but by replacing the third ingredient and adjusting the doses of the remaining ingredients very different formulae are produced.

To return to Guizhi tang, one of its most famous modifications is an excellent example of how altering dosage can produce new formulae: Guizhi jia shaoyao tang (桂枝加芍药汤, Cinnamon Twig Decoction with Additional Peony Root). In this formula the dosage of shaoyao is doubled. This greatly increases the strength of the shaoyao + zhi gancao formula element, allowing the formula to more effectively soothe the liver and the sinews, treating the cramping pain that often accompanies diarrhea (in this case a taiyin-spleen vacuity diarrhea).

Understanding how the formulae of a family are related to one another–how they are constructed and modified–makes remembering their ingredients far simpler. Many such formula families exist in Chinese medicine, and understanding them is a key method of formula memorization.

All herbalists, whether just starting to learn or with many years of experience, have to keep memorizing and reviewing formulae. It’s just part of the process of being a good herbalist. Many people find memorization difficult, but everyone is capable of tremendous feats of memory–it’s part of our human skill set. We just have to learn how to use that capacity. These three methods have been very useful for me, and I hope that others may find them useful as well.