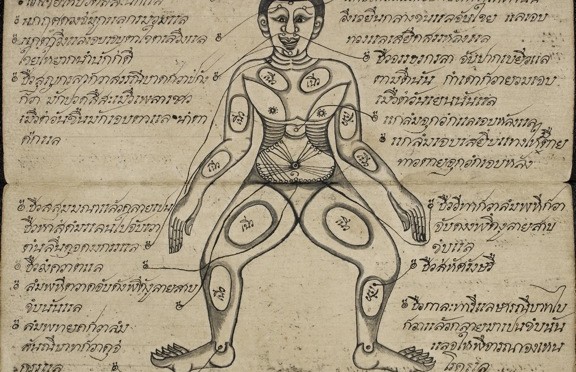 “My initial interest in traditional healing in Thailand began with a trip to Thailand that was billed as a study tour of Northern Thailand Healers. It was advertised in a professional journal. I travelled with a pair of old friends (one of whom had previously lived in Thailand for 3 years and spoke some Northern Thai). We drove from Chiang Mai into the hill-tribe villages north west of Chiang Mai in what is called the upper north of Chiang Mai Province. It was late March and early April, the hottest driest time of year in that part of Thailand. The heat was intense, and the terrain mountainous and jungle-covered. There was a lot of dust and smoke. At that time of year smoke from the burning off associated with forestry and swidden agriculture obstructed our vision, gave us all chronic coughs and didn’t let us appreciate the full beauty of these mountain landscapes. We visited a variety of different hill-tribe practitioners (Hmong, Lisu, Black Lahu, Red Lahu and Karen) and some local Northern Thai practitioners who worked in Chiang Mai Province. It was a tourist package but had been advertised in a professional journal as a study tour and most of the small group of eight people were naturopaths or had a broader interest in traditional healing practices.

My memories of the trip are of my intense frustration at not being able to talk to the healers we visited and at the speed of the tour (it was a whistle-stop travel experience). There was a sense too, of peering briefly at a range of practitioners and practices that I realized even then I wanted to know much more about. I disliked the sensation of being a tourist in relation to traditional medicine and in many ways felt myself to be interacting with healers who practiced in a different cultural tradition, but with whom I felt an affinity. For many people these traditional healers may have been exotic but as a herbalist and naturopath I recognized in these traditional medical practices, similar kinds of understandings of the body, health and treatment to those found in ‘traditional herbal medicine’. Ideas about health and well-being were couched in terms of balance. Descriptions of patients and plants as hot and cold, and foods as medicines, were familiar to me from my own herbal tradition. Health in Thailand is considered a fragile, daily balance in which the environment, family and social relationships, emotions, spirits, karma and magic all feature. Patients speak of being dry and hot, of their medicines as cooling and refreshing and describe foods as strengthening. Folk healers talked about illness in terms of blood (lueat เลือด), poison (phit พิษ) and karma (kam กรรม). There were also features of the medical tradition that were quite unfamiliar to me like the use incantations (khaa thaa คาถา) to potentize medicines and to secure beneficial outcomes.

The other main memory I have from this trip was of managing somehow to have a fruitful conversation with the mo tam yae (หมอตำแย midwife) at a Lisu village where my herbal colleague and I shared birthing lore. Needless to say they were far more experienced in this area than we were. We spoke through the village headman, a youngish Thai man who spoke English, had a university education and had returned to his Lisu village home, which was unusual. We talked about everything from the use of roses for skin treatment to the use of ice-cubes for moving mal-positioned foetuses. Even now (14 years later) I wonder about whether this information has been used by the midwives. Did these bits of knowledge slip into practice in this Lisu village? Have these fragments of information and practice entered into Lisu traditions, in the way that the adoption of Hopi ear candles has permeated Australian naturopathic practice? ” (Hunter, 2014 (unpublished thesis): p.39-41)

This is a fragment from the thesis I subsequently wrote about the modernization and professionalization of traditional medicine in Thailand. I went on to spend a year in Thailand (in 2009 and 2010) doing ethnographic fieldwork as part of a PhD in medical anthropology at the University of Melbourne. I lived with, talked to and befriended many traditional medicine practitioners in Chiang Mai. I immersed myself in their world of students, classes, rituals and in the conferences which took place during my time there. I did my research not as a total outsider (despite my obvious whiteness and very basic command of Thai) but as a herbalist and teacher from another tradition. What I wrote about in my thesis was the way in which traditional medicine practitioners were now able to choose between learning from a teacher (khruu ครู) or going to university. As you can imagine the difference between becoming an apprentice and becoming a university student is considerable.

What I explored in my thesis was the changing landscape of traditional medicine education in Thailand. Folk healers established their knowledge through a sense of vocation by apprenticing themselves to a teacher, a process which linked them to a lineage of knowledge and teachers extending to Shivaka Kormarpaj, the Buddha’s physician and the Father of Healing in the Thai tradition. This method of learning was  an oral tradition. Students learnt by watching and working with their teacher; learning how to recognise plants, how to make medicines and observing how their teacher treated patients and gradually absorbing the healing traditions which had been passed down over centuries. The healing practices were taught in the context of the Buddhist culture they were drawn from. Healing rituals, use of magic and incantation were all part of healing practices. Rituals, beliefs and practices were local and the healing traditions of Thailand vary considerably from region to region.

By contrast modern university training has been established through a process of drawing together material in a formal educational curriculum. It draws on written sources and because it is taught in a modern educational institution it has been grafted onto a scientific base. Students acquire a formal education which emphasizes the scientific rationale for using plants and massage. They learn about plant medicines using pharmacology and chemistry as the lens through which they understand their properties and uses. They are trained to work in a modern health system and to work with nurses, doctors and pharmacists. In short they are trained to be modern health professionals.

I’ll write more about what these changes in the education of Thai traditional medicine practitioners mean in my next piece.