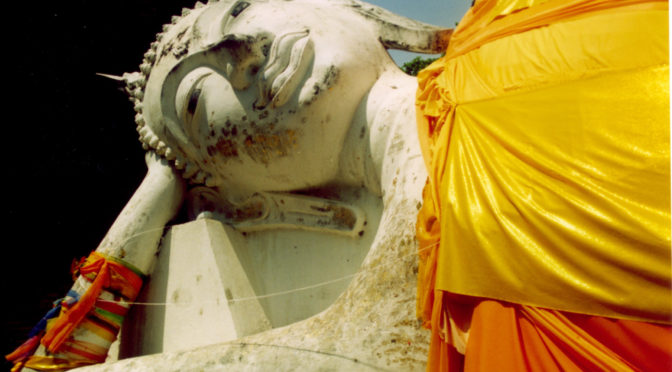 Dr. Salguero is an interdisciplinary humanities scholar interested in the role of Buddhism in the crosscultural exchange of medical ideas. He has a Ph.D. in History of Medicine from Johns Hopkins School of Medicine, and teaches Asian history, religion, and culture at Penn State University’s Abington College, located near Philadelphia. He is also a long-time practitioner and teacher of Buddhist meditation, yoga, and traditional Thai medicine. More information about his research and publications is available at www.piercesalguero.com.

This is a syndicated post that first appeared at http://www.patheos.com/blogs/americanbuddhist/2017/05/a-roundup-of-critical-perspectives-on-meditation.html

I am not a scholar of Buddhist meditation. My own research has only touched on meditation insofar as it was claimed to have therapeutic benefits in a handful of texts in premodern Asia. But, as a long-time on-again/off-again practitioner myself, I have been following the rise of meditation in American popular consciousness over the past 15 years with interest. More recently, I have also begun following the critiques of meditation that have circulated in scholarly and practitioner communities, which some observers have begun to characterize as a “backlash.” This post is a roundup of such critiques.

I do not claim that the list below is comprehensive, that the examples I’ve chosen are particularly influential, or that my insights are particularly original. Other people have rounded up critiques of meditation before me, including in this great (though absurdly expensive) book that goes into great depth. This post is simply my way of making sense of the critical perspectives that most interest me, from my own personal vantage point as a scholar and practitioner.

Some of the most salient critiques of contemporary meditation (and of mindfulness meditation in particular) have come from within the Buddhist fold. There are multiple specific objections that belong to this category, including (but not limited to):

This latter point, which is the least commonly articulated of the three, at least in English-language popular media, is the one that connects best with my research. I have found little evidence of mass interest in meditation in my readings of historical Buddhist texts on health and wellbeing. And, from what I can tell from my formal and informal ethnographic studies in contemporary East Asia, Thailand, and Asian-American Buddhist temples in the US, it is not the dominant feature of contemporary Buddhist practice either. In fact, I think it’s now uncontroversial to acknowledge that before widespread lay involvement in meditation began in 19th-century Burma as a product of colonial-era reforms and sensibilities, and still today in most parts of the world, very few lay Buddhists have ever meditated.

Another widely accepted critique of meditation is that the therapeutic claims made about its efficacy have been wildly exaggerated. Serious studies of meditation (e.g., Goyal et al., 2014) and of MBSR in particular (e.g., de Vibe et al. 2012) have tended to be rather cautious in reporting the benefits of these practices. This contrasts markedly with the piles of URLs from the popular media filled with breathless hyperbole hyping mindfulness as a cure for this or that ailment—or even as a super-power.

… Or at least, that was the state of things a year or two ago. Somewhere in late 2015 or early 2016, the tides seem to have begun turning, and critiquing mindfulness itself has now become mainstream. Questioning the overblown claims about meditation is now the favorite passtime of the very same popular media outlets that previously had been peddling the myth of mindfulness-as-panacea (e.g., Psychology Today, Inc. magazine, Newser, etc.). It seems that perhaps the stress-busting juggernaut has begun moving on to greener pastures. (What’s next, you ask? I’ve got my money on drumming for stress relief.)

This critique has been around for quite some time, but has recently gained more traction. The idea, in a nutshell, is that meditation rhetoric places the onus on the individual to manage their own stress. Attention is thus moved away from addressing structural problems that cause the stress in the first place (for example, exploitative corporate labor practices, hostile work environments, economic precarity, etc.). And, of course, the individual is encouraged to pay for products, apps, and workshops to learn to destress, which further benefits corporate interests at our expense.

I believe the first person to suggest that meditation is a tool for the production of acquiescent capitalist subjects was Slavoj Žižek in his article, “From Western Marxism to Western Buddhism,” 16 years ago. Ron Purser & David R. Loy’s 2013 article popularized the label “McMindfulness” for the phenomenon of corporatized mindfulness, and was helpful in pushing this critique into the mainstream. Outside of mainstream media, this line of argumentation has continued to be developed in increasingly sophisticated ways by Marxists and critical theorists, among whom Tom Pepper and others at the Speculative Non-Buddhismwebsite have been the most vocal (and, at times, bombastic). Although these blogs (and especially their comment sections) are sometimes difficult to wade through, they collectively articulate a sharp and trenchant criticism of 21st-century meditation that I think should be required reading for any serious practitioner today.

Another objection that has been circulating widely of late might be summarized as the “whiteness of meditation critique.” Several people, including myself, wrote about this when TIME magazine’s infamous 2014 magazine cover was released. White-washing certainly is not limited to popular representations of meditation: a number of pointed articles have appeared in the past year or so highlighting the systematic erasure of Asian Americans and other Buddhists of color by the mainstream media. These outlets tend to hold up Caucasian practitioners as the mainstream face of American Buddhism, while fetishizing Asian teachers and culture (Žižek again), and overlooking Asian Americans and other non-white Americans entirely. Some highlights of this particular genre include articles by Wakoh Shannon Hickey, Chenxing Han, Funie Hsu, Ajahn Amaro, and the Buddhist Peace Fellowship.

The final type of critique I will raise here is one that the critic of modern Buddhism Glenn Wallis has called the “principle of sufficient Buddhism” (see his Speculative Non-Buddhism website), and which has also come up in different guises in other places as well (e.g., Dharma Overground and the Imperfect Buddha podcast). Applied to meditation, this critique might take the following form:

Buddhist doctrine and mindfulness hype both tell us that by doing meditation, we gain greater insight into reality “as it is,” but what if those changes in perception are just the product of changes in the mind or the brain that are in themselves inherently meaningless? Even if we stipulate that meditation reliably leads to changes in our perceptions of the world, how do we know that these perceptions are more true or more accurate than those we had before? Or, worse, what if meditation functions like some form of self-hypnosis that results in a further distorted view of reality. How would a committed skeptic be able to tell the difference?

Wallis’s point, as I understand it, is that Buddhism can’t answer these questions without making circular arguments that rest on Buddhist doctrine.

So, from this perspective, what is left to recommend the practice of meditation? If we extend Wallis’s sufficiency critique further, I think it also prevents us from boiling meditation down to any other single explanatory paradigm (appealing to the sufficiency of neurological states, for example, or of the placebo effect). In my view, the only answers that seem to remain relevant are personal, experiential, modest, even mundane.

Is it enough that meditation merely helps me to fall asleep, or that it makes unpleasant physical experiences a bit more tolerable, or that it makes me a little more patient with my kids? Or do we need more? What do you think: can you articulate why you meditate without falling into one of the traps outlined above?

Pierce Salguero is an interdisciplinary humanities scholar interested in the role of Buddhism in the crosscultural exchange of medical ideas. He has a PhD in the History of Medicine from Johns Hopkins School of Medicine, and is Assistant Professor of Asian History and Religious Studies at Penn State University’s Abington College, in the Philadelphia area. He is the author of Translating Buddhist Medicine in Medieval China (UPenn Press, 2014) and Traditional Thai Medicine (White Lotus Press, 2016) and the editor of Buddhism and Medicine: An Anthology of Premodern Sources (Columbia U Press 2017). See www.piercesalguero.com.