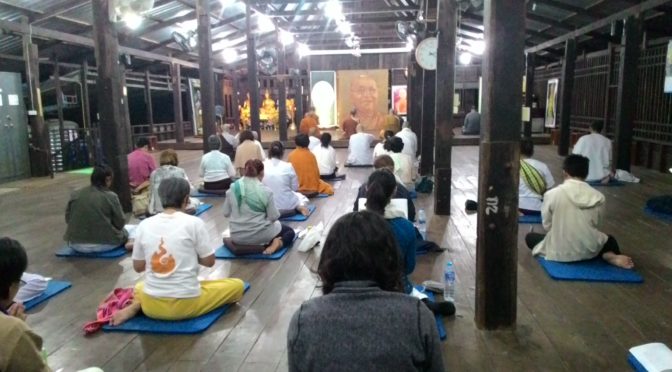 Elsa Ngar-sze Lau 劉雅詩
Ngar-sze Lau is a PhD candidate at the Department of Politics, Philosophy and Religion at Lancaster University. Her thesis examines the emergence of Theravāda meditation communities in contemporary China.

Meditation (chan), recognized as one of the key practices in Chinese Buddhism, has in mainland China historically been restricted mainly to monks at Buddhist monasteries. However, there has recently been an increasing number of laypeople learning various satipaṭṭhāna meditation practices from the Theravāda traditions, especially vipassanā derived from Burmese and Thai teachings. Hundreds of people have attended seven-day or ten-day vipassanā retreats in different parts of China. Drawing on interview transcripts from recent fieldwork in mainland China, this chapter focuses on the healing experiences of Han Chinese vipassanā practitioners.

Vipassanā, as it is known today, is largely a product of the modern era. With the influence of colonization and Buddhist modernism in the late nineteenth century in Southeast Asia, various Buddhist meditation practices were modernized. Scholars have identified Ledi Sayadaw (1846-1923) as a key player in the modernization of vipassanā.[i] As a Buddhist scholar and meditation teacher in Burma, Ledi Sayadaw simplified the theoretical underpinnings of meditation (the abhidhamma), and emphasized the cultivation of insight through vipassanā rather than the intensively ascetic mental absorptions known as jhāna. These innovations evoked a massive increase in lay people learning meditation in Burma.

After the independence of Burma in the 1950s, the vipassanā meditation teachings of Mahāsi Sayadaw (1904-1982), and their adaptations by lay teacher Satya Narayan Goenka (1924-2013) have become popular, and have spread to other Asian countries such as Sri Lanka and Thailand.[ii] Since the 1960s, some westerners travelled to Myanmar and Thailand to learn meditation as monastics or lay practitioners. Vipassanā meditation has been spread to Europe and North America by these Western meditators, as well as by Asian monks who have established meditation centers in the West and published meditation manuals in English.

Since the turn of the century, various meditation practices from Theravāda traditions have also been spread to Malaysia, Singapore, Taiwan, Hong Kong, and then mainland China through published books, websites, and travellers.[iii] Some Buddhist monastics and lay people from China have travelled to Southeast Asia to stay at meditation centers for a few months, or even a few years, to learn meditation. After returning to mainland China, some Chinese practitioners have organized retreats, inviting teachers from Myanmar and Thailand to teach vipassanā meditation in China.

In the mainland Chinese context, vipassanā meditation is translated as neiguan chan (lit. “internal contemplation meditation”), which emphasizes the observation of the mind and the body. Among those vipassanā meditation practices transmitted into contemporary Chinese societies, popular teachings include that of Mahāsi Sayadaw and Goenka from Burmese lineages, and the dynamic movement practice of the Thai monk Luang Por Teean. There are currently six vipassanā meditation centers set up offering Goenka’s meditation program across the country,[iv] and one meditation center offering Luang Por Teean’s teachings in Sichuan.[v] Although there is thus far no center dedicated to Mahāsi Sayadaw’s system established in China, a few famous disciples of his, including U Paṇḍita Sayadaw (1921-2016) and Chanmyay Sayadaw (b. 1928) have led retreats in China.

The three systems of meditation have their differences. Mahāsi Sayadaw has highlighted the role of vipassanā in helping the practitioner to overcome suffering by understanding the true nature of body (rūpa) and mind (nāma) as being composed of the Five Aggregates, according to the classic Buddhist doctrine. Unlike Mahāsi Sayādaw, Goenka uses the terminology of modern science. He explains that the mind and body are “nothing, but subtle wavelets of subatomic particles,”[vi] and he highlights vipassanā’s adaptation for modern life as a “secular, universal and scientific technique.”[vii] Unlike both Mahāsi Sayādaw’s and Goenka’s methods, which teach meditators to sit still with closed eyes to attain calmness, Luang Por Teean’s meditators practice rhythmic movements continuously. Keeping their eyes open, they believe that this practice can train the mind to become active, clear, and pure and to realize a state of freedom.

Overall, the transcripts from interviews that are excerpted and translated below will demonstrate that a number of Han Chinese practitioners of vipassanā have claimed to experience significant therapeutic benefits from their meditations. Many experienced practitioners shared that the main cause of suffering is attachment to self and material things in Buddhism. Vipassanā meditation has facilitated them to understand impermanence and not-self through mind-body experiences, so that they can deal with physical pain from their physical illness. The strong moment-to-moment awareness from the meditation practice in daily life can help meditators to reduce the sense of self and attachment to material world. With the right attitude of practice, the mind can cultivate calmness and joy with a balanced mental state. Hence long-term meditators can easily contented with their balanced mental state in daily life. Without a striving mind in the mundane world, one can reduce suffering and unhappiness gradually.

[i] Braun 2013. Burma is used in this chapter to refer to Myanmar before the end of colonization.

U Tejaniya, Sayadaw [Dejianiya Chanshi]. 2014. Bie qingshi fannao [Don’t Look down on the Defilements: They Will Laugh at You]. Translated by Li Mingqiang. Jianxi: Jianxi Buddhist Academy.

Abhidhamma     ‘higher teaching’; refers to the collection of commentaries on Buddhist canon