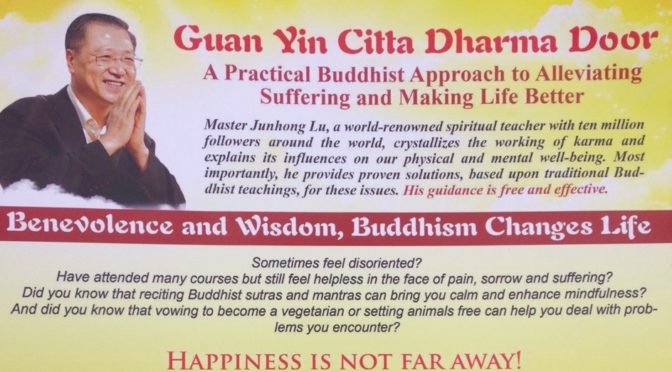 This is a syndicated post that first appeared at http://www.patheos.com/blogs/americanbuddhist/2016/03/buddhism-and-health-illuminating-the-spectrum-of-therapies.html

About two months ago, we began to notice a new presence on the streets of Philadelphia’s Chinatown. A cadre of volunteers in red and gold jackets was hitting the pavement, handing out fliers in English and Chinese to announce the arrival of a new organization called Guan Yin Citta Dharma Door. Their glossy color fliers announce a “practical Buddhist approach to alleviating suffering and making life better.” Through the “effective and systematic” practices of sutra recitation, releasing “beings destined for slaughter,” and making “great vows to help more people,” the flier promises that one can “lay a solid foundation for improved physical and mental well-being.” 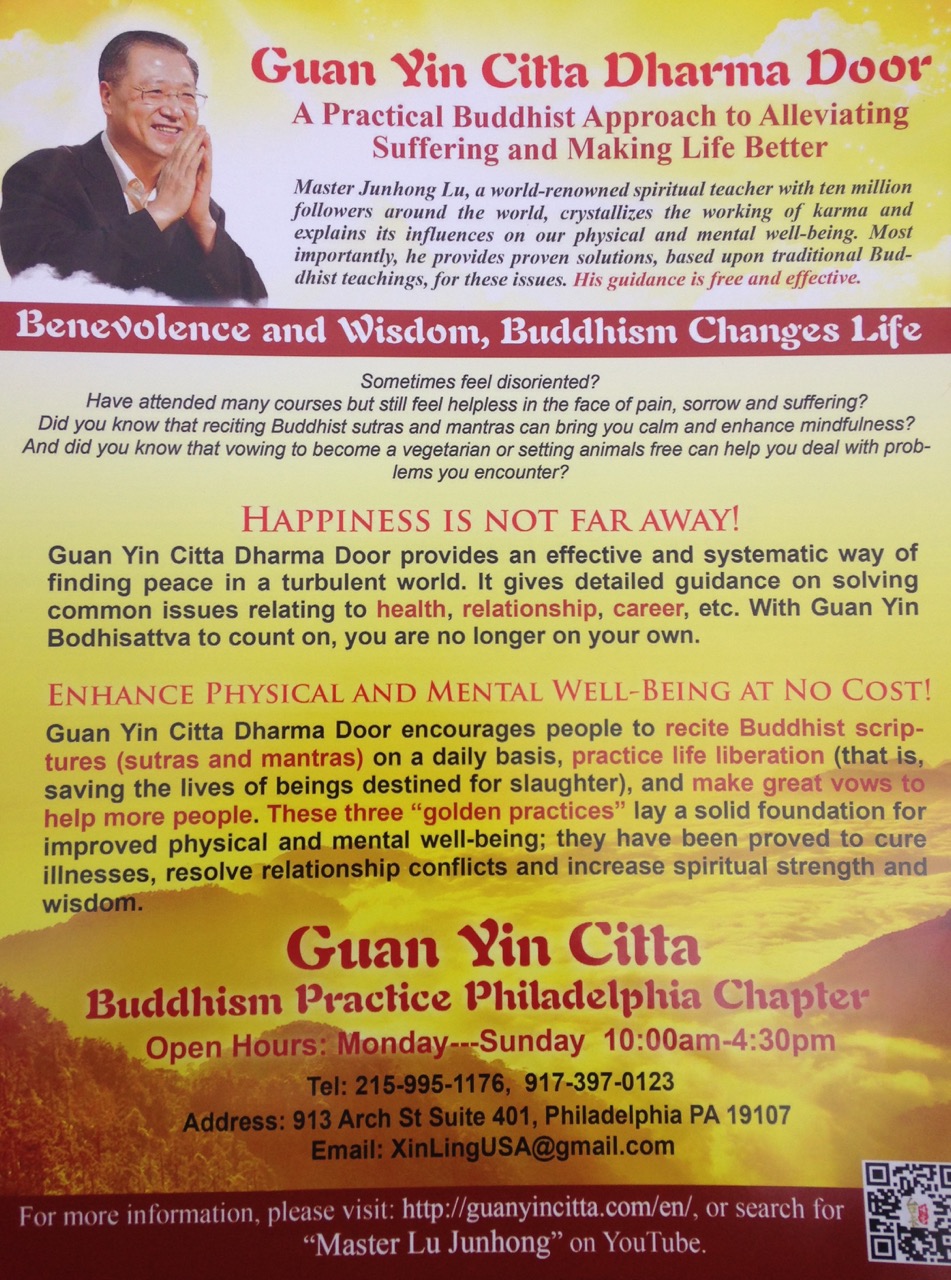 The “Beyond Mindfulness” project has involved the participation of a multilingual team of undergraduate student researchers over the span of several years. In the first year, we identified about 40 organizations, evenly split between those that are largely Caucasian and those that are largely attended by Asian immigrants. We also developed a survey tool (http://goo.gl/forms/7bZcDZGzGR) to gauge ideas and practices regarding the connections between Buddhism and health. Over the course of the second year, three students and myself visited the targeted locations and conducted preliminary interviews with monastics, teachers, and/or community representatives at each. We were assisted in many cases by student liaisons who were themselves members of the cultural-linguistic group we were visiting, and who were able to facilitate cultural awareness and offer some basic translation assistance when necessary. Wherever possible, we also distributed the survey among community participants. Next year, the project will enter the third phase: more in-depth interviews at selected locations, extensive audio-video recording, and the production of a short documentary film on Buddhist responses to illness in the Philadelphia area.

So, we were excited when Guan Yin Citta burst onto the scene. The other day, a student and I visited the headquarters at 913 Arch Street, in the heart of Chinatown. While still outside the building, we were showered with bilingual DVDs, glossy booklets, newspapers, swag bags, and other paraphernalia (all free, raising the still unanswered question of how the well-funded operation is being financed). A handful of volunteers invited us upstairs to a shrine room, where a modest Guanyin altar and a few seats were provided. Our hosts (who happened to be mainland Chinese and Southeast-Asian-Chinese) excitedly told us about their devotion to the leader of their movement, Master Lu Junhong, who has earned a certain amount of international celebrity for his ability to channel the bodhisattva Guanyin. Master Lu has a visible presence on YouTube, social media groups, and web pages, but the current goal in Philadelphia is to create a community of local devotees that is large enough that Master Lu will make an personal appearance in the city. The closest he has come so far, we are told, is New York.

Although with Guanyin’s help he can see invisible spirits, know about previous lives, and locate missing objects, Master Lu’s specialty is diagnosing illnesses. Once the cause of the illness is revealed, he prescribes a remedy consisting of a certain number of yellow tallies (literally titled “gifts” 贈). Each tally requires devotees to complete a total of 247 repetitions of the Great Compassion Dharani 大悲咒, the Heart Sutra 心經, the Rebirth Dharani 往生咒, and the Seven Buddhas Mantra for the Eradication of Sins 七佛滅罪真言. Each tally—which we are told takes about 4 hours to complete once one is proficient—is worth 30,000 credits in hell, and can be used to liberate beings stuck in unfortunate rebirths or to appease demonic entities. However, one must constantly be on guard: completed tallies must be kept in a red envelope and away from windows, so as to prevent demons, ghosts, and other nefarious spiritual beings from stealing their power for their own benefit. 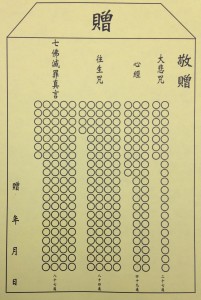 According to our hosts, there is seemingly nothing that cannot be cured or remedied with enough completed tallies. They mention a series of ailments they or their friends have suffered, ranging from inconvenient to life-threatening, and cite the precise number of tallies that was required to cure each one (these figures ranged from 21 to over 100). We spend over an hour listening to a whole string of stories of miraculous healing, changed fortunes, and lucky breaks. Before we finally have to depart, we are encouraged to drink a glass of the blessed water that sits in several large dispensers, charged with the beneficial powers of the many people who have stopped by the shrine room to chant and pray.

For scholars of Chinese Buddhism and of Chinese religions more generally, none of the above is particularly surprising. The charismatic male leader with a cadre of proselytizing devotees, the explicit focus on health benefits, the conceptualization of magical power as a type of currency, the unseen host of ghosts and deities that can harm and help ordinary humans, the possibilities for miraculous transformations latent in everyday life — all of this is the ordinary fare of Chinese popular religions of all stripes. I was excited to find this organization, not because of how different or unique they are, but because of how they are bringing such typically Chinese ideas and practices into the public eye on the streets of downtown Philadelphia in such a visible, high-profile, and bilingual way.

Guan Yin Citta is but one datapoint in our “Beyond Mindfulness” project, one of the many organizations in the area where our ethnographic work has revealed a close connection between Buddhism and healthcare. Though contemporary mainstream America is fascinated with the health benefits of meditation, this focus has tended to overshadow our appreciation of the sheer diversity of ways that Buddhism impacts the healthcare landscape in the US. Our study explicitly intends to draw more attention to the non-white and non-English-speaking voices that are often overlooked as this conversation unfolds in popular media. Guanyin’s miraculous interventions in the lives of the Philadelphia Chinese community matter not only because of the profound impact these have had on certain individuals, but also because they illuminate the rich spectrum of therapeutic repertoires that Buddhism continues to make available in America today—beyond the headlines and social media buzzwords associated with mindfulness.

If you’d like to contribute to our research project, please consider spending 10-15 minutes filling out this online questionnaire about how you understand the relationship between Buddhism and health: http://goo.gl/forms/7bZcDZGzGR. This version of the survey is open to people from any location in the world, of any religious or spiritual background, and I’m grateful for the information you choose to share!