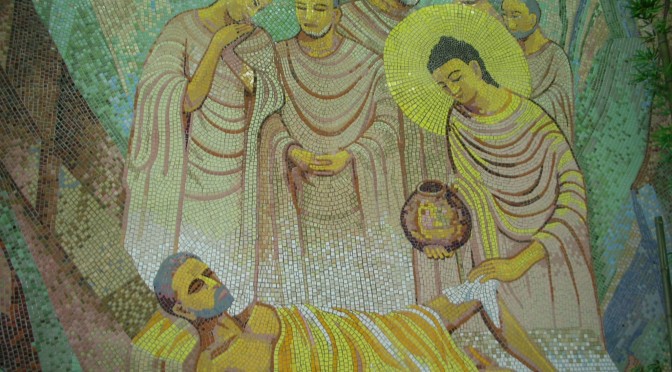 In this blog, I provide short abstracts of important Buddhist medical sources in Pāli. Note that I have only included texts, chapters, or sections that are primarily about medicine or nursing. There are many Buddhist texts that include isolated or scattered references to relevant topics which have not been included. This list is a work in progress that will be continually updated. The date above reflects the most recent date of modification. For references to the secondary scholarship cited here, see the H-Buddhism Bibliography Project on Zotero.

Please note that the abstracts below were written by C. Pierce Salguero, and are offered here under a Creative Commons license. They may be copied, distributed, or displayed for non-commercial purposes as long as the author is attributed. Any derivative works must be released under the same terms.

The Great Elephant Footprint Simile (Mahahatthipadopama Sutta)
MN 28. Translated in http://www.accesstoinsight.org/tipitaka/mn/mn.028.than.html
A discourse by Sariputta on the Great Elements (Earth, Water, Fire, Wind, and Space). This text is counted among the earliest descriptions of the Great Elements in Indian literature. Under each of the first four Elements, Sariputta lists the anatomical structures and physiological factors that relate to the Element.

The Greater Exhortation to Rahula (Maha-Rahulovada Sutta)
MN 62. Translated in http://www.accesstoinsight.org/tipitaka/mn/mn.062.than.html
Similar descriptions of the Elements as MN 28 (see previous entry). This text advocates developing meditations “in tune” with the Elements.

The Discourse on Angulimala (Angulimala Sutta)
MN 86. Translated in http://www.accesstoinsight.org/tipitaka/mn/mn.086.than.html
The sutta focuses mainly on the conversion of Angulimala from a criminal to a realized monk. However, in one scene he blesses a mother and her unborn child through the power of a truth-statement, and both were healthy.

Excerpt from the Monastic Code: Vinaya regulations on medicine
Mv 6. Translated in Horner 2000 vol. 4, pp. 269–350.
To my knowledge, this is the only complete set of Indian monastic regulations on medicine and nursing care available in English translation. Includes enumeration of allowed medicines, instruments, and procedures. The bulk of this chapter of the Mahāvagga is concerned with rules regarding food, but medicine and nursing are major themes, particularly in the beginning sections and at the very end.

Excerpt from the Monastic Code: Biography of Jivaka
Mv 8.1.1–36. Translated in Horner vol. 4, pp. 379–97.
The biography of Jīvaka Komārabhacca, a physician and lay supporter of the sangha that is well-known in the Pāli Canon. Jīvaka is the abandoned son of a courtesan, adopted into the home of the royal family by Prince Abhaya. He learns the craft of medicine, and the biography recounts six healing episodes. These culminate in his cure of the Buddha of a case of the doṣas. This tale illustrates medical ethics, medical and surgical procedures, and the model physician in ancient India.

Excerpt from the Monastic Code: The Monk with dysentery
Mv 8.26.1-8. Translated in Horner vol. 4, pp. 431–34 and http://www.accesstoinsight.org/tipitaka/vin/mv/mv.08.26.01-08.than.html
The Buddha comes across a monk who is ill, and inquires why he is not being assisted by his fellow monastics. Ānanda replies that this monk did not care for his brethren when they were sick, so they do not now care for him. The Buddha then outlines the requirements for giving nursing care among the sangha, the five qualities that make a patient easy or difficult to tend, and the five qualities that make for an effective or ineffective nurse. Both the narrative and the statements by the Buddha are found the Vinayas of other traditions (see discussion in Shinohara 2005; Salguero 2014).

The Discourse to Sivaka (Sivaka Sutta)
SN 36.21. Translated http://www.accesstoinsight.org/tipitaka/sn/sn36/sn36.021.than.html
The Buddha refutes the notion that all human experience is preconditioned by karma. He specifies that, while some feelings are caused by karma, others are caused by bile, phlegm, wind, the combination of the three, the seasons, “uneven care of the body,” and harsh treatment. This appears to be one of the earliest mentions of the tridoṣa in Indian literature, although they are not identified with the word doṣa in this passage (see discussion in Scharfe 1999).

Gilana Sutta series
SN 46.14, 46.15, 46.16. Translated in http://www.accesstoinsight.org/tipitaka/sn/sn46/sn46.014.piya.html, http://www.accesstoinsight.org/tipitaka/sn/sn46/sn46.016.piya.html
In this series of discourses, the Buddha or one of his venerable disciples become ill, but are healed when reminded of the seven Factors of Awakening.

The Casket of Medicine (Bhesajjamañjūsā)
Translated in Liyanaratne 2002, 2009.
The only extant medical treatise written in Pāli, from thirteenth-century Ceylon. The first volume contains discussion of basic principles; the second mainly etiology and therapy. This text is similar in many respects to the Aṣṭaṅgahṛdaya.