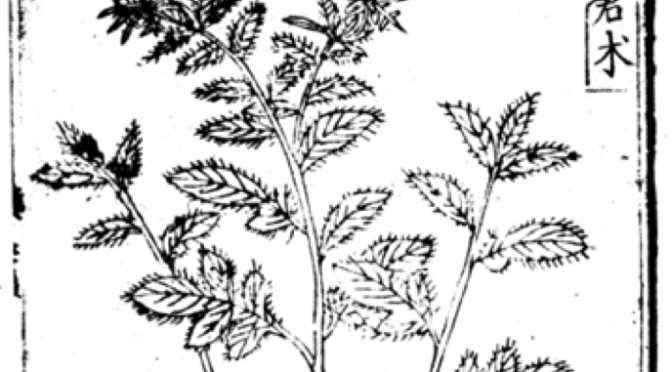 Michael Stanley-Baker
Michael is a post-doctoral fellow at the Max Planck Institute for the History of Science in Berlin, jointly appointed by the Berlin Center for the History of Knowledge. He graduated from University College London with a PhD in the History of Medicine, and also holds a clinical degree in Chinese medicine. Michael investigates therapeutic diversity in early medieval China (220-589 CE), and also serves as the treasurer for IASTAM, the International Association for the Study of Traditional Asian Medicine, the foremost practitioner/scholar organisation for studying medical traditions across Asia.

This is a syndicated post by Michael Stanley-Baker that first appeared at https://recipes.hypotheses.org/4802  It is reproduced here with the author’s permission.

Located in his mountain retreat near the Floriate Sunlight Cavern on Mount Mao, China’s earliest recorded pharmacologist, Tao Hongjing, is deep in his studies. He is editing the earliest known recension of the Chinese Pharmacopoeia, the Divine Husbandman’s Pharmacopoeia (Shennong bencao jing 神農本草經). It is about the year 500, and Tao is also compiling a collection of manuscripts, sacred revelations to a local family, the Xus 許 of Jurong, revealed to them over 130 years earlier. Collectively titled the Declarations of the Perfected (Zhen’gao 真誥), they cover all manner of topics that interested the Xus, from personal salvation, bodily cure, the contours of the underworld, to the political careers of their friends who had died and passed over into the bureaucracies of the afterlife. One manuscript in this collection celebrates a plant native to the Mao mountains, the herb atractylodes, cangzhu 蒼朮.  It describes not only the medical properties of the plant but an entire array of health-related and salvific practices. It is revealed by the Goddess, the Lady of Purple Tenuity, Ziwei Wang furen 紫微王夫人, whose title refers to the canopy of heaven surrounding the pole star. This manuscript, copied in the hand of the younger of the two Xu brothers, Xu Hui 許翽, is titled Discourse on Eating Atractylodes (Fu zhu xu 服朮序).  It begins at the end of time, with the apocalypse that was predicted for the year 392. In succeeding layers, the Lady of Purple Tenuity describes different practices which for dealing with the disease, warfare and famine to come.

There are massage and breathing exercises which nourish vitality (yangsheng 養生) to ensure robust health while drawing meditative awareness to the interior of the body.  These circulate qi and activate divine beings in the body.1 Other similar repertoires from this period further included daoyin 導引 stretching like those pictured here, sexual cultivation, and diet.

The Lady of Purple Tenuity goes on to describe the next phase of practice, in which the adept visualizes starry gods of the dipper and other asterisms as celestial bureaucrats, inviting them to take up residence in the body. These visualizations anthropomorphize the bodily awareness of earlier breathing meditations, and match the body with the movements of the stars, of the seasons, of the five phases.   Then come fantastic alchemicals, beyond material making or financial access, which stretch the imagination and aspiration:

Tiger spittle, phoenix brain, white cornelian, jade frost, lunar liquor of the Grand Bourne, thrice-cycled numinous steel.  If you offer up a knife-point’s worth, your divine feathery wings will spread wide. Opening up the supreme writs of the void-like cavern, you will blaze in glory in the chamber of the primordial beginning…2

Finally, Lady Wang lays out the highest levels of practice: oration of the Great Cavern Scripture (Dadong zhenjing 大洞真經), and the other supreme texts of the tradition. These install supreme deities throughout the body, grant immortality and ascension to the highest layers of heaven. They will

cause the 5 organs to flourish and thrive and guard and close the mysterious portal [between the eyes]. Visualize the nine perfected [beings] within the brain and the three qi will transport fluids [through the body] and irrigate the elixir field.3

Only then, Lady Wang begins to discuss plants:

One can add [to one’s lifespan] with the five micas, water cassia, atractylodes root, polygonatum, Lyonia Ovalifolia, sunflower, eastern stone, malachite, oily pine nuts, sesame, poria. These are all tools for cultivating life; using them can lengthen your years. I have completely investigated the successes and failures of trees and herbs. There are those which quickly benefit to oneself, but none equal the many proofs of the power of Atractylodes.4

It is here where she reveals that atractylodes, alone among all others, can dispel ghost-borne diseases at the millennial climax. The plant among plants, it is the key to survival in the end times.

Eat this potent herb to care for your health, swallow the floriate springs of clear rivers; study the secret instructions concerning mysterious wonders, and intone hidden texts of the most high. If you do this nesting high in mountain caves, you’ll be able to talk of your years in the same terms as metal and stone.5

This is not just a recipe for making a drug, it is a recipe for life, for salvation. Three recipes using atractylodes appear elsewhere in the Declarations as separate documents. They each describe technical details of boiling, sieving and pulping the root, frying it with wine or mixing it with honey, jujubes or pine nuts.  Other passages in Tao’s collection show that the Xu family were taking atractylodes for different reasons: Xu Mi 許謐 the father, was taking it for his semi-paralysed arm. the youngest of his three sons, Xu Hui 許翽 was taking it to prepare his digestive system for austere ascetic diets where he would give up food entirely to live on herbs or just qi. But why articulate atractylodes into this larger program?  Giving it this special meaning bound up the Xus with the sacredness of the mountains on which it grew. During the cataclysm the Mao mountains were to be the site where the Lord of the Dao from on High would descend to save the worthy. The Xus chances of being saved depended on two kinds of merit.  Firstly, the merit gained from persevering in their spiritual practices and achieving bio-spiritual transformation .  However, their access to these practices was due to the merits of their ancestor, Xu Ah, who compassionately dispensed drugs and food in the region during epidemic and famine.The salvific qualities of Atractylodes brought these two together, binding their elite heritage, and their spiritual practice, their past and their future, into a direct relationship with the land, the mountains and the local ecology of medicinal herbs. The very mountain where the Xus were destined to be saved was the same site Tao Hongjing had chosen for his own editorial efforts, both of the Declarations, and the Pharmacopoeia.  What of the Lady of Purple Tenuity’s knowledge of actractyldoes travelled into Tao’s Pharmacopoeia, written for the emperor, and intended for exoteric transmission outside? The eschatology, the other practices, the Xus disappear in that work. The pharmacopoeic format is regular and predictable, each entry proceeding with the drug’s name, flavours, temperature, toxicity, major functions and so on. Atractylodes is reported useful here for blockage syndrome in the limbs, which was Xu Mi’s condition, and for digestive problems, which correlates to Xu Lian’s fasting. Furthermore, Tao’s annotations report that “Transcendent Scriptures say” that it can suppress epidemic poxes and disperse evil qi, codewords for ghostly diseases, echoing the claims of the Discourse. Do these separate collections indicate broader cultural distinctions between religion and medicine, between recipes and pharmacopoeias, between local and centralized, or esoteric and exoteric knowledge?