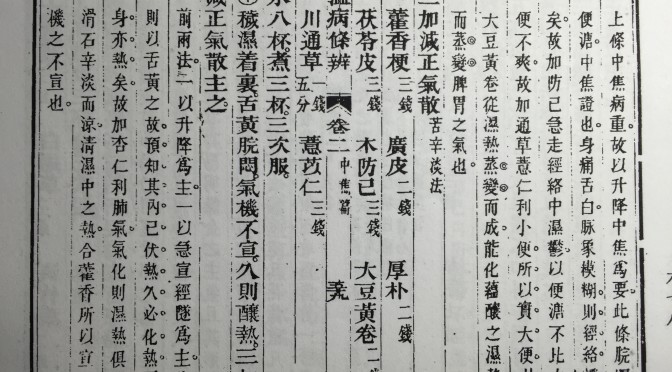 This post originally appeared in The Bulletin of the Xinglin Institute 2016.1.

One of the more common modern uses of Chinese medical case histories (yi’an 醫案) is pedagogical. Cases are presented to allow the student to learn how to apply the doctrines of Chinese medicine in actual clinical situations. This use of case records has a long history in Chinese medicine, and was clearly one of the primary purposes of the first collections of cases, composed in the Song Dynasty (960-1279).[i] In these collections, ideas and practices described in normative, universally applicable terms are given contingent, personal illustration through medical cases. This use of cases is well was found in many fields other than medicine—such as jurisprudence and literary studies—and has attracted considerable scholarly attention.[ii]

Cases could also be used as the starting point for new normative doctrines. In this usage, the contingent response of an individual physician becomes the basis for texts striving to provide guidance on how all physicians should practice. While it is often assumed that personal clinical experience guided the development of doctrines in Chinese medicine, medical cases made it possible to develop doctrines and treatments on the basis of someone else’s clinical experience. The technology of the case history made contingent, personal experience both durable and mobile, allowing it to play new roles in the formation of medical doctrine.

One of the most striking instances of this is Wu Tang’s 吳瑭 (styled Jutong 鞠通, 1758-1836) use of Ye Gui’s 葉桂 (styled Tianshi 天士, moniker Xiangyan 香岩, ca. 1666-1745) medical cases as the basis for his influential text, Systematic Differentiation of Warm Disease (Wenbing tiaobian 溫病條辨, 1798). Ideas taken from Ye Gui’s case histories inform many of the doctrines, diagnostic principles, and formulas presented by Wu. In the translations below I trace lines from the Systematic Differentiation back to Ye’s case histories to show how Wu worked with them and transformed them.

59. When dampness is depressed in the three burners, the stomach duct [i.e., epigastrium] is oppressed, the stool is sloppy, the body aches, the tongue [coat] is white, and the pulse image is indistinct, Second Modification Correct the Qi Powder [Erjiajian zhengqi san 二加減正氣散] governs it.[iii]

The formula includes the following ingredients:

Among Ye Gui’s case histories, collected and published by his students, we find the following:

The two passages are all but identical. The signs and symptoms described and the formula recommended are the match exactly, and with few exceptions, even the same Chinese characters are used. Seen side-by-side there can be no doubt that the passage from Systematic Differentiation is based directly on Ye’s medical case.

The similarity of these two passages, however, conceals important distinctions. Both selections are extremely terse; but while the terseness of Ye’s case seems to reflect its origin as notes hastily scrawled by students following Ye in his clinic, the terseness of Wu’s passage has a purposeful quality. Systematic Differentiation is structured as a series of brief numbered lines followed by more extensive autocommentary. Wu kept the lines brief to facilitate study and memorization.[vi] Ye’s case records his contingent response to a specific patient with a particular illness; Wu’s line seeks to establish a prescriptive norm for all physicians to follow. Likewise, although the medicinals recommended in both lines are identical, Ye’s case simply lists them without naming them as a fixed formula. Wu’s text gives this combination of medicinals a name for the first time. By doing so, he not only codified the formula but actually brought it into being.[vii] Even though he combined the same medicinals, Ye Gui never used Second Modification Correct the Qi Powder—it simply did not exist as a formula. Ye’s selection of medicinals was an ephemeral assemblage designed for a fleeting circumstance. Wu’s formula was an enduring object—as testified by the fact that it is still used today. Finally, Ye’s case history appears in a long list of such cases. Although they are separated into broad categories and interspersed with occasional doctrinal discussions, the overall form of the text is simple: case followed by case followed by case. No explanation is given for Ye’s diagnoses or choices of medicinals. Wu’s text, however, is organized into chapters, sections, and subsections. Every numbered line is followed by autocommentary explaining the illness pattern described, how it is diagnosed, why the particular medicinals were chosen, and sometimes the historical background to Wu’s point of view. While both texts may be said to have a pedagogical purpose, Ye’s case histories place the burden of understanding on the reader, leaving her free to interpret as she chooses. Wu’s treatise guides the reader’s understanding and insists on being interpreted in one way and no other.

Wu transformed Ye’s contingent and particular clinical responses into normative and universal clinical guidance, but he did not do so by rejecting the specificity and particularity of Ye’s cases. There are other cases in which Ye treats similar patterns of illness with similar medicinals. Wu could have collated all of the similar cases and synthesized them into a general prescription, seeking—as many modern authors have[viii]—to define the Ye’s approach in general terms. Instead Wu chose to separate out the various instances in which Ye used similar formulas. The next line in Systematic Differentiation provides an excellent example.

60. When foul damp adheres to the interior, the tongue [coat] is yellow and the stomach duct oppressed. The qi dynamic is not diffusing. If this continues for a long time, it will result in the fermentation of heat. Third Modification Correct the Qi Powder governs it.[ix]

The formula contains the following ingredients:

And in Ye’s cases we find:

[In a patient surnamed] Wang, 32, the tongue [coat] was yellow and the stomach duct was oppressed. Foul damp was adhering in the interior. The qi dynamic was not diffusing. If the fermenting and steaming continue for a long time, it will definitely produce heat qi and [the patient] will suffer the trouble of fever: apricot kernel, patchouli, poria skin, talc, magnolia bark, and the white inner layer of Guangdong tangerine peel.[x]

The patterns of illness described in these two passages are not only identical to one another, they also extremely similar to the pattern seen in the selections above. Wu could easily have combined these two patterns into one precedent. The differences in the formulas could be incorporated by listing formula modifications to be used when the patient presented with slightly different symptoms—a practice that has a long history in Chinese medicine. Wu, however, chose a different approach. Rather than seek the commonalities of Ye’s cases, Wu looked for their particularities. He turned individual cases into exemplars for treating specific patterns of illness. He changed the particulars of the patient’s presentation into general criteria for diagnosis and the contingency of the recommended medicinals into a named formula. He transformed the contingent and particular into the normative and universal not by generalization but by selection.

But Ye Gui did not invent his combinations of medicinals ex novo. Two related formulas, both called Correct the Qi Powder, were well-known in Ye’s time. They are first attested in the Song dynasty Imperial Formulary for the Benefit of the People in the Era of Great Peace (Taiping huimin hejiju fang). The ingredients of these formulae are quite similar to those that Ye recommended (to aid in comparison I have referred to the ingredients by their most common names even when the original text used a variant name).[xi]

Wu Tang clearly thought that Ye was drawing on these formulae for inspiration—as indicated by the names he chose for Ye’s formulae—and he was probably correct. Ye criticized physicians who were not well-read and repeated demonstrated his familiarity with most of the more famous medical texts through references to them. Ye looked back to older recorded formulae as foundations upon which to develop new combinations of medicinals appropriate for the particular patients he was treating. Wu looked back to Ye’s medical cases as a foundation upon which to build a new doctrinal edifice. Text led to clinic and back to text again; the universal led to the particular and back to the universal; the normative led to the contingent and then back to the normative. These sorts of transformations are probably exceedingly common in the history of Chinese medicine. The “case” of Ye Gui and Wu Tang is especially interesting for the clarity with which it reveals this process and because it shows that the primacy of printed books, even in the transmission of the contingent and particular practices of the clinical encounter.

[iv] The Chinese traditionally considered a child one year old at birth, I have converted ages in the case histories accordingly.