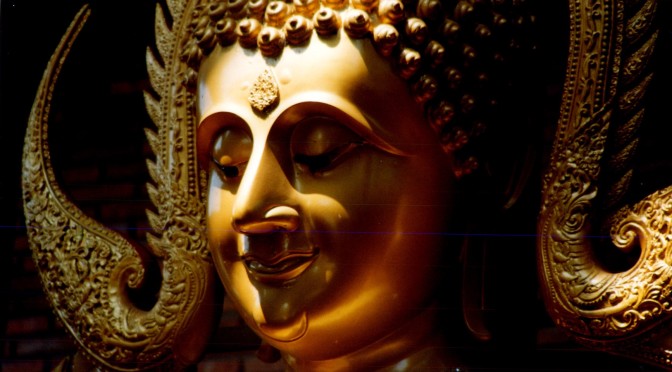 Pierce Salguero
Dr. Salguero is an interdisciplinary humanities scholar interested in the role of Buddhism in the crosscultural exchange of medical ideas. He has a Ph.D. in History of Medicine from Johns Hopkins School of Medicine, and teaches Asian history, religion, and culture at Penn State University’s Abington College, located near Philadelphia. He is also a long-time practitioner and teacher of Buddhist meditation, yoga, and traditional Thai medicine. More information about his research and publications is available at www.piercesalguero.com.
Latest posts by Pierce Salguero (see all)
This is a syndicated post that first appeared on BuddhistDoor
By C. Pierce Salguero

Though he lived in the sixth century, Zhiyi (538–597) has a lot to teach the modern practitioner of meditation, whether Buddhist or secular. He is best known as the founding patriarch of the Tiantai school of Buddhism, widely considered to be the first native East Asian school, and thus a precursor to Chan and other later developments. Among the foundational writings of Tiantai are several treatises on meditation composed by Zhiyi.

Although it is popular to think of meditation as a solution for all kinds of illness, Zhiyi knew it was more complicated. In his Shorter Treatise on Samatha and Vipasyana (in Chinese, Xiao zhiguan), Zhiyi suggests not only that not all illnesses can or should be treated with meditation, but that meditation itself can be a cause of illness: one might be unskillful in harmonizing the mind, body, and breath, and thus fall ill. But he does advise eight different healing meditation practices.

These eight practices are divided into two categories. First are the calming meditations, or, as he calls them, employing the Chinese translation of the Sanskrit samatha, “stopping” meditations:

Next, Zhiyi introduces what he calls “seeing” meditations. Here he uses the Chinese translation of the Sanskrit vipashyana, although most are quite different from what contemporary meditators mean by the term vipassana. There are four practices in this category:

1. The Six Breaths, a Chinese exercise in which the practitioner makes the sounds “chui,” “hu,” “xi,” “he,” “xu,” or “si,” while exhaling in order to regulate internal processes.
2. The Twelve Respirations, which are different types of Indian breathing exercises (pranayamas) intended to regulate various symptoms of illness.
3. Visualization techniques in which one concentrates on one type of qi in order to counteract ailments caused by others. (He gives the example of concentrating on fire-like qi to cure cold in the body.)
4. Finally, Zhiyi mentions using both samatha and vipasyana together to “analyze the non-existent nature” of physical and mental illnesses, resulting in their spontaneous healing. 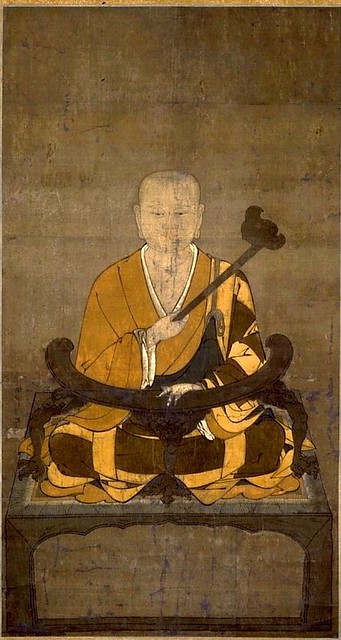 Painting of Master Zhiyi, founder of the Tiantai school
of Buddhism. From wikipedia.org

Lamentably, Zhiyi does not give us much detail on specifically how to practice the techniques mentioned in this particular chapter. (Zhiyi did write instructions on samatha and vipasyanameditation, much of which has been translated into English. [Chih-i 1997; Zhiyi 2009]) The most detailed descriptions he gives concern the specific medical applications of the Six Breaths and for the Twelve Resiprations.

For example, each of the Six Breaths should be used as follows:

For the Twelve Respirations, he instructs:

In closing the chapter, Zhiyi offers general reflections on the practice of healing using meditation. Advising the practitioner to become skilled in all of the eight techniques, he notes that he has only provided an overview, and that we should seek out more complete instruction. Above all, Zhiyi is emphatic that healing meditations help us cultivate various good qualities. He explicitly states that if one follows 10 “dharmas,” then one’s “treatments are guaranteed to be effective and will not be in vain:”

1. Faith in the effectiveness of the methods outlined in the text.
2. Regular practice.
3. Sustained effort.
4. Staying entirely focused on the object of the meditation one chooses.
5. Clearly discriminating the causes of illness (presumably in order to apply the correct meditation).
6. Using skill in choosing the right practice for the ailment in question.
7. Maintaining a long-term perspective and not giving up when results come slowly.
8. Knowing when to continue with a beneficial practice and when to abandon a non-beneficial one.
9. Avoiding mental distractions and moral transgressions.
10. Avoiding hindrances to practice such as pride and frustration.

Zhiyi lived in a very different religious and medical culture than we do today. Throughout the essay, we see that his notion of illness revolves around traditional Asian medical concepts, such as qi and the “five viscera” from Chinese medicine and the “four elements” from Indian classical medicine. However, it is quite possible that Zhiyi’s essay is describing contemplative techniques that can be proven to be efficacious in the modern context. At the very least, he is pointing out avenues beyond the current fixation on mindfulness meditation that merit further medical research and exploration.

C. Pierce Salguero is an interdisciplinary humanities scholar interested in the role of Buddhism in the cross-cultural exchange of medical ideas. He has a PhD in the history of medicine from the Johns Hopkins School of Medicine, and teaches Asian history, religion, and culture at Penn State University’s Abington College. He is the author of numerous books and articles on Buddhism and medicine, including Buddhism and Medicine: An Anthology of Premodern Sources.

The Body in Buddhism
Sitting Karate, Sitting with Shihan
Everyone with a Cow Owes Me a Favor – Dancing, Healing, and Spiritual Realization, Part One
Loving your Tick: Book Review of Mindfulness as Medicine